Remember this post about the Parkland shooting and representation of high schoolers? The play I was talking about back then is now available, on Smashwords and Amazon. 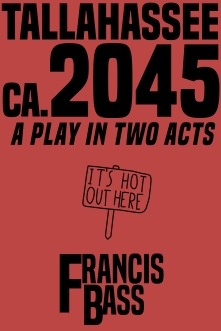 In the year 2045, a group of politically conscious high school seniors decides to organize a youth rally—a protest to lower the minimum voting age. Just before the protest is scheduled to happen, a massive ice sheet breaks off of Antarctica, causing global flooding. The youth rally becomes a demand for radical change of climate policy, and the politics of the students are put under new pressure. Relationships between the original group of friends strain as the protest grows further and further out of control, and any hopes of changing the world look dimmer and dimmer.

Tallahassee Circa 2045 is an exploration of protest culture, shifting ideologies, and the intersection of youth and politics, set against the backdrop of global catastrophe and an ever-shifting national landscape.

In addition to the play, this publication includes an afterword (a large part of which already appeared on this blog in that MSD post) which constitutes an in-depth look at youth rights, representations of high schoolers, and the politically tumultuous period in which the play was written.