Dangerous Corner is a 1932 play by British writer J.B. Priestley, about a dinner party attended by the directors of a publishing firm and their wives. Pretty soon the audience learns that one of the directors, Martin, recently committed suicide, and was suspected of embezzling money from the company. A few moments later, one of the guests, Olwen, makes an offhand remark about recognizing a cigarette box—a cigarette box that she shouldn’t have any memory of, because it was originally Martin’s, and it was mailed to him the day he died. Olwen’s remark is like a single loose thread in a sweater, and once Robert, one of the directors and the brother of Martin, pulls at it, the sweater begins to unravel, spooling out a series of interconnected secrets that every last character has been hiding, all wrapped up in the death of Martin and the embezzled money. In the final act of the play, Robert, in a drunken craze, retrieves a revolver, the lights go down on the stage, and we hear a shot and a woman’s scream. When the lights come up, we are back at the beginning of the play, with the female characters having just listened to the last scene of a murder mystery radio play. The play progresses as it originally did, only this time, when Olwen remarks on recognizing the cigarette box, it goes unnoticed, as one of the directors succeeds in tuning in to a channel on the radio—something he had failed to do in the first iteration of the timeline.

Priestley presents time in a very concrete, mechanical way, as a series of events with causes and effects, and with specific choices directly affecting the chain of events. This if clear, of course, in the final scene in which the audience sees the entire course of the play altered by one instance, but it’s also clear throughout all the revelations that form the meat of the show. The characters are constantly trying to figure out who is to blame for Martin’s death—who is the person at the root of all of it?—and with each secret revealed, the blame shifts, and the timeline that the characters are constructing reorganizes itself to place a different person as the catalyst for all the events. The conflict and tension of Dangerous Corner comes from these clashing timelines that each character holds, and the only way to resolve the tension is by filling in the gaps with more information from other characters. Of course, each contribution to this communal timeline only opens up more questions, and reveals new gaps that have to be filled. Ultimately, the timeline can never be perfect because at the heart of it is Martin—someone whose understanding of the chain of events has disappeared from the world with his death. Olwen herself describes the problem of clashing realities when she’s talking about the radio play:

“The point is, I think—there’s truth and truth. … the real truth—that is, every single little thing, with nothing missing at all, wouldn’t be dangerous. … But what most people mean by truth, what that man meant in the wireless play, is only half the real truth. It doesn’t tell you all that went on inside everybody.” (5)

Indeed, the biggest gap in the story, the hole that will never be filled, is “all that went on inside” Martin. It seems like everyone had a different relationship with him, and characters will often assert something along the lines of, “you didn’t know him as I did.” When Robert is convinced that Martin killed himself because Martin believed that Robert stole the money, and Martin was shaken by his older brother’s misconduct, Robert explains, “But neither of you knew him as I did.” (37) When Freda, Robert’s wife, learns that Martin attempted to assault Olwen, she moans that “he wasn’t like that really. If you’d known him as I’d known him—before.” (42) Although the characters are intending to invoke authority when they say this, as if they are experts on who Martin is, Priestley’s precise phrasing points to the reality of the situation. You didn’t know him as I did. Not a definitive “I knew him,” or “I knew him best,” but rather a distinguishing between the different ways that different characters understood Martin, understood his experiences, composited his history.

The play also explores the clashing perceptions that the characters on stage have of one another, not just their debate over Martin’s actions. Betty, an apparent ingénue, tells Robert, after he’s admitted to being infatuated with her, that “You were only worshipping someone you’d invented, who looked like me.” (47) Indeed, Robert’s perception of Betty as wholesome, innocent, the only person not wrapped up in this quagmire, is shattered when Betty reveals she was having an affair with Stanton, the senior director. But the most interesting instance of this type of conflict is when Freda reveals to Robert that she was in love with Martin. Robert has to recalibrate his understanding of her, and everyone has to recalibrate their understanding of her relationship with Martin and how her visiting Martin affects the timeline, but for Freda this is the resolution of a conflict that has been going on within her: “I wanted to [tell you.] Hundreds of times I seem to have tried to. I’ve said the opening words to myself—you know—and sometimes I’ve hardly known whether I didn’t actually say them out loud to you.” (29)

This is what the play fixates on, at all levels—the coexistence of multiple narratives. On the largest scale, the play itself presents two alternate narratives that coexist on the same stage—one in which a myriad of secrets is revealed, and one in which nothing is revealed. On the smallest scale, we see how differing realities can exist within one person’s head—with Freda imagining a world where she revealed to Robert that she was in love with Martin, or Betty and her husband Gordon trying to convince themselves that they’re the darling, happy, young couple when their marriage is really a sham.

On a level somewhere between the whole play and the mind of a single character, Dangerous Corner shows the coexistence of all the different timelines that each character holds in their head—in Robert’s mind, Martin stole the money and killed himself from the guilt. In Olwen’s mind, Robert stole the money, and Martin was killed in an accident. In Gordon’s mind, Martin was fond of him, and not interested in women. In Freda’s mind, Martin was fond of her, and thought Gordon a nuisance. All these different narratives can coexist with each other, as long as they are all hidden, and kept isolated. The audience sees this at work at the end of the play, when Olwen’s comment about the cigarette box goes unnoticed, and everyone dances to Bing Crosby’s “Can’t We Talk It Over.” Every character has their own piece of the truth, their own ordering of events at odds with all the others, and as long as they all pretend to believe in the same shared timeline—that Martin killed himself from guilt over embezzling money—these separate timelines will never clash. They can also coexist if they are all revealed—though as Olwen says, this will always be “only half the real truth.” (5)

The audience, who are piecing this plot together themselves and trying to pick up on hints about secrets before they are revealed, is also challenged to fill in the gaps. Which is the real timeline, the one where the radio distracts them all from Olwen’s comment, or the one where Robert ends up shooting someone? Are they both real? Who was Martin, actually? Was he mean, as Olwen thinks? Was he homosexual, as Gordon implies? The ability of different actors to play characters in different ways, emphasizing certain traits over others, constructing their own backstories and motivations, adds to the confounding impossibility of comprehending a complete, perfect timeline.

Perhaps the temporal, never-the-same-show nature of theatre is why Priestley, a prolific novelist and short story writer, developed this idea for his theatrical debut. There is the same conflict between all the characters (the conflict of the shared timeline versus the individual timeline) between different actors, different directors, all sharing the same script with the same order of events, but all bringing their own interpretations, their own invented extra-textual narratives, all collaborating to construct a half truth that the audience too will have to grapple with and composite for themselves. 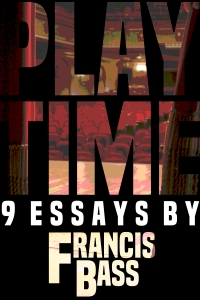 If you enjoy these posts, consider purchasing Play Time to support posts like these, and the blog in general! The collection holds all the posts that have appeared on the site so far, polished up for the book, plus the next four that haven’t been published yet. You can get it on Smashwords and Amazon.