I loved A Series of Unfortunate Events when I read it as a kid, and now I’m rereading and re-loving all thirteen books. Today’s post is about The Carnivorous Carnival, the ninth book of the series. This post will contain spoilers for book 9 and some of the books preceding it, so if you don’t want plot information given away, then in the words of Lemony Snicket, “your time might be better filled with something more palatable, such as eating your vegetables, or feeding them to someone else.”

In The Carnivorous Carnival, the Baudelaires arrive at a rundown carnival in the hinterlands, where Count Olaf is consulting the fortune-teller Madame Lulu to learn the location of the Baudelaires, and whether or not one of their parents survived the fire. Violet, Klaus, and Sunny disguise themselves as carnival freaks, and try to discover how Madame Lulu knows so much about the Baudelaires, and perhaps pre-empt Count Olaf’s next move. Count Olaf also helps Madame Lulu by trying to raise the popularity of the carnival, letting one of his henchmen direct the freak show and make sure the freaks are properly humiliating themselves, and installing a pit of lions.

The book is sparkling with amusing, vibrant characters, from the mysterious Madame Lulu to Kevin, whose big, freakish, shameful quality is that he is ambidextrous (“Is that why you traveled out here to the hinter-lands, so you could stare at somebody who can write his name with either his left hand or his right?”—hilarious. [66]) It’s strikes the perfect tone for a book about a carnival—colorful, eccentric, and with a strong undercurrent of sadness and danger. It also provides a great opportunity for me to talk about:

In my post about The Vile Village I explained the differences between the books in the first half of the series, and the books in the second. Another difference, which I didn’t mention then, is the nature of the unfortunate events. In the first half, the unfortunate event at the end of every installment is Count Olaf getting away. This is continued into the second half, but also combined with the the Baudelaires repeatedly failing to uncover the mysteries of VFD, and more and more misinformation about them spreading with each book.

The misinformation begins in the first chapter of book 7, when an article in The Daily Punctilio misidentifies Count Olaf as “Count Omar,” and misidentifies his girlfriend Ésmé Squalor as someone he has kidnapped. As a kid, I always found this to be one of the most terrifying things about these books—as a kid, it seems that anything you say has a miniscule chance of convincing an adult that you’re telling the truth, and so often they’ll sooner believe an adult who doesn’t know the full story, or who is actively lying. This is why a scene at the end of The Reptile Room always struck me as so sad, when one of the movers dismantling Uncle Monty’s reptile collection doesn’t believe the Baudelaires that one of the specimens is harmless. The mover even makes an unfounded jibe about Uncle Monty, saying, “But this guy was supposed to be brilliant … But then, what can you expect from a man whose own name was Montgomery Montgomery?” (185-186) The feeling that you can’t convince someone of your point of view, because they’ve dismissed you as a child before you even begin to argue, resonated with me. The Baudelaires insist that their guardian was brilliant, but the mover seems unconcerned, and it feels like Uncle Monty’s reputation is slipping away into nothingness—an unverified claim, discounted as the sentimental commentary of children. So, the concept of a newspaper printing slanderous lies about the Baudelaires is an incredibly effective way to ramp up the tension of the books of the second half, and to continually have the Baudelaires buried under more and more serious accusations.

Mainly, this sense of danger comes from the reporter from The Daily Punctilio, later named in The Penultimate Peril as Geraldine Julienne. Geraldine Julienne embodies the dramatic tension of this theme by constantly crying out headlines, as in, “I can see the headline now … ‘BAUDELAIRE MURDERERS TORCH PAPERWORK,’” (The Hostile Hospital 216) “I can see the headline now: ‘EXCLUSIVE INTERVIEW WITH COUNT OLAF, WHO IS NOT COUNT OMAR, WHO IS DEAD,’” (The Carnivorous Carnival 216) or, “I can see the headline now: ‘BAUDELAIRES CONTINUE THEIR LIVES OF CRIME!’” (The Carnivorous Carnival 272) These I-can-see-the-headline-nows portray a character who is ravenous to build a juicy narrative out of what she’s observing, so ravenous that she has to cry out headlines while the story is unfolding, before she can even take a step back and look at the whole thing. They’re also a dramatization of what is happening to the Baudelaires—their stories are being rested from their control, and formed into pop entertainment for the readers of the newspaper.

More subtly, this sensationalism is in direct contrast with the way Lemony Snicket is shaping their story, which is summed up well when he writes that:

The Sad Truth Is that the Truth Is Sad

Snicket repeatedly describes alternate stories—things that could’ve gone differently in the lives of the Baudelaires, hypothetical happy endings—and tells the reader that they can believe this if they want, but that he can not write it because it wouldn’t be the truth. At the beginning of Chapter 8 of The Vile Village, Snicket writes that he wishes he could strike the day he is about to describe from “the Snicket calendar”—the day that Jacques Snicket, presumably his brother, was murdered. “But I can’t erase this day,” Snicket continues, “for the simple reason that the story does not go that way.” (136) This calls to mind the song at the end of the first season of the Netflix adaptation of Unfortunate Events—“That’s Not How the Story Goes”—which essentially carries the same message.

In The Hostile Hospital, this idea is explored with the Volunteers Fighting Disease, an overly cheerful group whose motto is “No news is good news,” and whose members confess to never reading the newspaper because “It’s too depressing.” (32) While this is a welcome reprieve from the owner of a general store the Baudelaires just fled, who is stubbornly trusting in The Daily Punctilio, it seems to be just as bad to completely reject information as it is to trust it blindly. There’s an echo of this theme in the climax of Hostile Hospital, in which Olaf’s henchmen attempt to lobotomize Violet, explaining that, “Many health problems are rooted in the brain, so that the best thing to do with a sick patient is remove it.” (194) The lobotomy scheme seems like a surreal exaggeration of the motto of the Volunteers Fighting Disease—there are so many things to worry about, the only way to prevent this is to cease all cognition by surgically removing your brain.

In The Carnivorous Carnival, the Baudelaires are placed in the center of this conflict between the sad truth and the sensational or sugar-coated fiction that might be easier to believe, mostly through their interactions with Madame Lulu. The Volunteers Fighting Disease would be a perfect match for the fortune teller and carnival manager, as her motto is, “give people what they want.” (151) Madame Lulu gives the carnival-goers what they want by having the freaks humiliate themselves, and she gives the people who enter her tent what they want in a few ways. One interpretation of her motto is that she’ll give information (which she gets not from magical powers but from a secret archival library full of salvaged scraps of files and newspaper clippings) to villains and volunteers alike. In this case, her motto is a justification for aiding Count Olaf’s horrible schemes. The other interpretation is that, if she doesn’t have the information, she tells people what they want to hear.

The Baudelaires enter this conflict when they overhear that Madame Lulu has told Count Olaf that one of the Baudelaire parents is surviving in the Mortmain Mountains. They are then faced with the choice that Lemony Snicket is repeatedly faced with, and that Snicket repeatedly presents to the reader—whether to believe in this happy idea, no matter how dubious or flat out incorrect it may be, or to continue to press on, and try to find out how the story actually goes. And just as the reader (presumably) chooses to ignore all of Snicket’s warnings and suggestions to put the book down and read something happy like The Littlest Elf instead, and just as Snicket chooses to continue documenting these unfortunate events, the Baudelaires choose to discover the harsh, confusing reality of their world, rather than be given what they want. Instead of believing that Madame Lulu truly has the power of divination, and thus one of their parents has survived, they reject this happy story and strive to uncover the truth, no matter how sad.

I know I basically only talked about news and truth in this post (and spent half the time talking about other books), but The Carnivorous Carnival has plenty to offer besides that. It’s got a terrific cast of new characters, and it’s the first book where we get a good look at Olaf’’s troupe, and how they interact with one another when the Baudelaires aren’t around (or they think they’re not around.) If someone just picked it up without having read the rest of the series, it’d be a great stand alone. And it contains what may be the greatest Unfortunate Events quotes of the whole series, which so perfectly resonates with the nature of the books:

“But the sad truth is that the truth is sad, and that what you want does not matter.” (144-145)
—The Carnivorous Carnival by Lemony Snicket 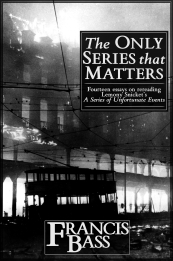 If you enjoy these posts, consider purchasing The Only Series that Matters to support posts like these, and the blog in general! The collection holds all the posts that have appeared on the site so far, polished up and consolidated for the book. It also contains “Chapter Fourteen,” an essay that won’t be published on this blog, discussing my relationship with the series through different parts of my life, and The Appalling Appendix—an index of selected notes, quotes, and observations from the file I kept while rereading the series. The collection is available on Smashwords and Amazon.