Now that I’ve explained what an “imperialist writing policy” is, and why it might be useful, here’s how to actually do it.

So you’ve got some reason for enacting an imperialist writing policy—what do you fill it with? What are your imperial holdings? As I said, with Suggest the Empire I initially began with plays I was already aware of—Shakespearean histories. However, Stuff Happens I only learned about by doing some research, looking up contemporary history plays. After finding these materials, I just continued with my life, and kept on the look-out for any books or shows or movies or podcasts that seemed like they could be useful, adding them to my curriculum as I found them.

I’d recommend the same—start with works that you are already aware of, or that you have already been wanting to read. If you have enough, great! If you don’t, it’s time to do some research. This is essentially how I determined what plays to read for Play Time (which was a literal curriculum, since it was an Honors project.) I started by looking at some plays dealing with time which I already wanted to read—We Are Proud to Present …, Strange Interlude, Top Girls, and Rosencrantz and Guildenstern Are Dead—then did some research. I pretty quickly found out about J.B. Priestly’s time plays, and stumbled upon a review of a few short Beckett plays staged together because of their similar treatments of time. The internet is an incredible thing.

If this seems overwhelming, start with Wikipedia. Look at the external links on the article, look at the references. Look up what resources your local library has, or, if you’re a college student, check out your university library. Find people who are experts in whatever you need to immerse yourself in, and see what they’ve written. See what they recommend. If you personally know anyone who has some experience with the topic, ask them to give you some recommendations—or, if they’re willing to give you their time, ask them questions about the topic and make note of the answers. Sift through your personal library, see if there are any old books you forgot you even had that might be useful (this is exactly how Top Girls made it onto the list for Play Time.) And if you’re really hitting a wall, just start reading whatever you have found. More likely than not (and especially if its non-fiction) that work will lead you to other works. You’ll start to get a sense of what the foundational texts in the field are, which authors keep coming up again and again, which authors have written stuff very similar to (and therefore very useful for) what you’re planning to write. END_OF_DOCUMENT_TOKEN_TO_BE_REPLACED

A year and a half ago I returned home for the summer break knowing that, whatever else I worked on for the next few months, by the end of the summer I wanted to have finished the rough draft of Suggest the Empire. At that point I’d already been wanting to write this play for a year or two, though I’d previously put it off because I knew it would be massive, strange, and demanding in multiple ways. How did I know this? Well here’s my short description for the play:

A history play about an invented history, exploring the theatrical nature of nationalism and empire.

So yeah. Massive strange demanding. And I had never read or seen a history play (in the Shakespearean sense of the term) back then at the beginning of summer 2016, so I decided that would be a top priority. I determined to read seven of Shakespeare’s histories—Richard III, Richard II, Henry IV parts 1 & 2, Henry V, and Julius Caesar—before beginning to write the play. I also added Stuff Happens by David Hare to my reading list, a history play about the lead up to the Iraq War. These were the works that I felt I had to read before beginning work on STE. Obviously I planned to write other stuff in the mean time, but I wouldn’t start Suggest the Empire until I’d finished those eight plays.

As I progressed into the summer I came across more and more works which I thought could in some way inform the writing of STE—youtube channels like Historia Civilis, documentaries like Secrets of Great British Castles, movies like Waterloo, games like Mount and Blade and Reigns—which I’d add to the list. Some of these I’d already been meaning to get around to, others I stumbled upon and decided to look into because of STE, and others I was already engaged with anyway, just by happenstance—the greatest example being The Absolute at Large. Just by luck, that very summer I was recording an audiobook of The Absolute at Large, a satirical novel which is heavily critical of nationalism and fanaticism. I came to think of this body of plays, movies, books, tv shows, and whatever else, as the product of an imperialist writing policy. I was not solely consuming, and working on, Suggest the Empire, though almost everything I consumed and worked on fed back to that play in some way. 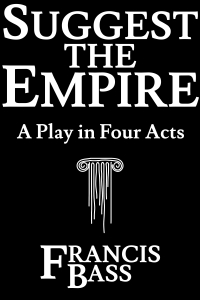 The result was that, when it finally came time to write Suggest the Empire, it was a breeze. Over the past months I’d become fluent in the language of empire, of nationalism, of history, of historical drama, and I had no trouble plotting out the story or sketching out the world, or, as I actually wrote the thing, sprinkling in realistic military, cultural, or political details. I’m incredibly proud of Suggest the Empire, and you can now buy the play! Ha ha you fool, I tricked you, this is all just an ad, ho-ho I got you!

Just kidding. If you have no interest in reading Suggest the Empire (which you can get on Smashwords or Amazon, or read the first act of free) this post, and the “How” post which will be up next week, should still be useful to any writer (or creator of any kind, I suppose) who wants to design their own imperialist writing policy. This isn’t the Only Way, or the Correct Way, to prepare for a piece of writing, but it is a method that I’ve found useful, which may prove useful for others. Alternately, if you’ve just read, or plan on reading, Suggest the Empire, these two posts should be a good look into my process in preparing for that play. I talk about it some in the afterword, among other things, but here I’ll be breaking down just that specific, preliminary part of creating the play. END_OF_DOCUMENT_TOKEN_TO_BE_REPLACED