My one act play Classic Cage is available in issue 3 of some scripts, their climate change-themed issue! The issue is available to read free for the next month, until June 11th, here. Here’s the synopsis:

Tara Cage is struggling to sell her next book. Publishers on Mars want another of her cheerful, optimistic Earth travelogues, the ones that made her so popular, but things have been getting bad on Earth. Climate change and economic upheaval have made Tara a lot more cynical, and sick of selling Mars a whitewashed version of her home planet. Her sister and literary agent, Michaela Cage, tries to grease the wheels with a potential publisher by getting a realtime FTL video connection between them on Mars and Tara on Earth. Unfortunately Tara’s internet connection has been screwy, making the video chat’s predictive AI patch over moments of lag with an AI version of Tara, compiled from calls made by Tara the last time she used it—which was twenty years ago. Between the upbeat, cheerful robo-Tara, and the true, jaded, bitter Tara, the publisher is getting mixed messages—though the AI seems to be making a better impression than Tara herself. 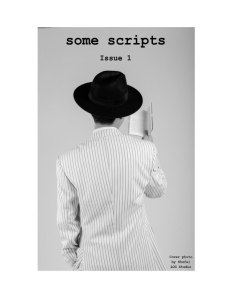 My short play The Ones I Used to Know is now available in the inaugural issue of some scripts! I’m so happy to have been included in this project, a magazine founded on the idea that scripts have literary merit, and can be enjoyed and appreciated even in their purely textual form. I’ll refrain from going into my full rant on the importance of reading plays, but basically the core ethos of this magazine is right in line with how I feel about scripts and screenplays as textual objects, and I’m as excited to be published in it as I am to read all the other contributors’ works.

My play is a ten-minute piece about climate change and Christmas music, set in a small town in Iowa. I realize this sounds awfully similar to “Fuck You Pay Me” but 1. Yes, and 2. They are actually quite distinct, and 3. You should check it out anyway!!!