Splendor and Misery by Clipping — So I’m late to the party on this, but better late than never, right? Splendor and Misery is a sci-fi concept album by experimental hip-hop group Clipping—already, what’s not to love? The album follows the lone survivor of a slave uprising aboard a spaceship, who commandeers the vessel and attempts to escape his pursuers.

What I love about this album is the way it blends ideas and styles. For a start, it’s fascinating to see how Clipping renders common sci-fi motifs musically, making them fresh and fascinating again. It’s not just an album that utilizes sci-fi jargon and aesthetics (though it does that as well), it’s an album that is clearly born from an understanding of the genre and its tradition. A great example of this is the track “All Black Everything,” which communicates the oppressive nothingness of space through it’s skeletal production and Daveed Diggs’s continuous, monotone refrain of “All black everything.” The album also blends different musical genres, mixing in negro-spiritual-inspired songs, blending past and future to create a gritty world that’s nevertheless full of emotion, and deeply human.

Sci-fi aside, the production on the album, by William Hutson and Jonathan Snipes, and Daveed Diggs’s rapping are just fantastic. The beats manage to suggest the environment, with beeps and clicks and staticky whines, while also effectively establishing different moods for each song. Diggs’s lyrics are great, punchy and complex, and his flow is phenomenal. Splendor and Misery really shows the range that this group has, from songs like “Air ‘Em Out,” a braggadocious gangster-rap-in-space type track, to “True Believer,” a song with a driving industrial beat, a spiritual-inspired chorus, and some wildly imagistic verses detailing a creation myth that offers some clues as to how these people have ended up enslaved.

The album is short, and has a lot to offer with each replay.

The Terror — This AMC series just wrapped up a few weeks ago and my god did it stick the landing. I love a good, one-season series, and The Terror does not disappoint (it may come back for a second season, though with a completely different story, American Horror Story-style.) The show, David Kajganich’s debut as a show-runner, is based off the Dan Simmons book of the same name, which tells a fictionalized account of the lost Arctic Expedition of Captain John Franklin. What little is known about the expedition’s fate after becoming trapped in the Arctic ice in 1846 is faithfully reproduced, and indeed everything that happens in the show could’ve plausibly happened in real life—except, that is, the strange, enormous bear (is it a bear?) which seems to dog the sailors wherever they go.

There’s a lot to love about this series. It’s got ten episodes to tell its story, and it doesn’t fuck around. Everyone turns in a great performance, but I’ve gotta highlight Jared Harris who plays Captain Francis Crozier, Captain of the HMS Terror (really, that was the name of this boat.) This may be his best performance, perhaps because here he’s given a leading role. Seeing his transformation as the crew’s circumstances become more and more dire is captivating, and he manages to stand out in a cast where everyone’s bringing their A-game.

Aside from great performances, this show nails the atmosphere. It’s bleak, and gritty, but still manages to be beautiful. Because that’s how the Arctic is. It’s not grim and black, it’s bright and white, endlessly barren and eerily enchanting. There are some truly stunning shots in this series which show just how cinematic television can be, and which wordlessly capture the isolation of the expeditioners’ environment. (This is all the more incredible considering that very little of the show was shot on location, and so much of the scenes on the pack ice are CGI. Incidentally, this fact also makes the performances more incredible.) The scoring of the show is excellent as well, low, minimal, artificial enough to be disturbing and grating, but not so much to feel out of place in a period show.

Lindsay Ellis’s The Hobbit Videos — As far as I’m concerned, Lindsay Ellis has singlehandedly (I mean actually Angelina M. is her co-writer/co-editor and Dan Olson did camerawork so add a few more handedlys in there) raised the bar for what film criticism on YouTube can be with this series.

The first video in this series is titled “The Hobbit: A Long Expected Autopsy,” and that’s a good way to describe all three videos—an autopsy. It’s not a review of the Peter Jackson Hobbit trilogy, it’s a wholistic examination of it, from the way it relates to The Lord of the Rings to Ellis’s personal feelings about it to it’s impact on the New Zealand film industry. This top-to-bottom approach is what makes these videos so great, as each different layer effects the others, and each new revelation creates a more complete, though still cohesive, picture of the movies.

With regard to scope and execution, these videos are everything The Hobbit wanted to be, with each video building on the last, gaining a larger and larger perspective on the films—all the while maintaining the smaller, emotional core of Lindsay’s personal relationship to the franchise, and her love of the original Lord of the Rings movies.

The first video is fairly standard criticism of the movies, although even here Ellis manages to add depth by explaining why these story structure problems existed, and how studio pressures ultimately affected the final product. The second video gets into the behind-the-scenes business even more, explaining how what could have been an artistically coherent project on a par with the Lord of the Rings trilogy steadily devolved into a mishmash of deadening focus-grouped nonsense. The final video delves into the “Hobbit Law,” and details how Warner Brothers worked with the New Zealand government to strip actors of collective bargaining rights, ensuring that the Hobbit trilogy could stay in New Zealand. It’s as wild as it sounds and more. Throughout all of this, Ellis keeps tying things back to her relationship with Lord of the Rings, and her relationship with media in general—how hard it is to grow up and see things you used to love being made through exploitative means (or learning that the thing you loved has been exploitative all along.)

The videos are thoroughly researched, insightful, and often funny. Another stand out feature is the interviews, especially her interview with John Callen, who played one of the dwarves in the movies and provides an invaluable perspective on the production process from within.

I think what really sets Ellis’s videos apart is the level of cultural, historical, and personal context she’s able to bring to the subject. On YouTube there’s currently a plague of “video essays,” and I say “plague” because lots of them are unbearably vapid. So many of these videos seem to exist in this airless, hermetically sealed void, with zero cultural or historical context, zero acknowledgement of biases, and a brutishly mechanical understand of storytelling and character which the narrator wields like a meat cleaver to make their points. Not so here. Ellis clearly knows a great deal about the production of these movies, and film in general, and she’s completely open about her nostalgia for Peter Jackson’s original LOTR films. Ellis’s analysis of Tauriel’s character is exemplary of this ability to provide relevant context, and could be a video its own right. Instead of just saying the character is unnecessary or poorly developed, she turns a critical eye to women in Tolkein’s writing, tokenist casting in Hollywood, and even the history of women in the fantasy genre as a whole. 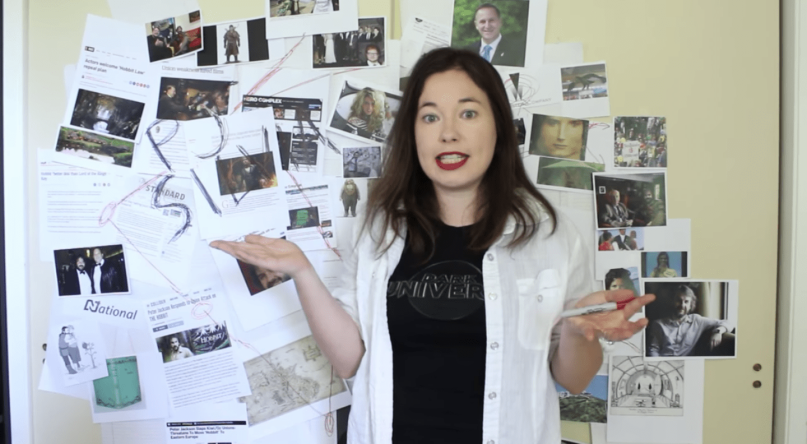 Going hand in hand with this, Ellis doesn’t boil down all moviemaking decisions to just the director. (I realize the irony of me saying this as I exclusively credit Ellis with everything in these videos, even though I know there were others involved. IDK who worked on what and how much. Let’s keep moving.) She really shows how movies are influenced by everything from actors to set designers to studio execs to … frame rate? do you guys remember this, how Peter Jackson thought 48fps was the future of filmmaking, and then it wasn’t???? … Right, she shows how all that can influence a movie, and how these big, bloated, baffling films come to exist in the first place.

If you’re into film or media studies, this series is a must—and Ellis’s channel is full of other great videos you should check out, albeit none with as grand a scope as this series.